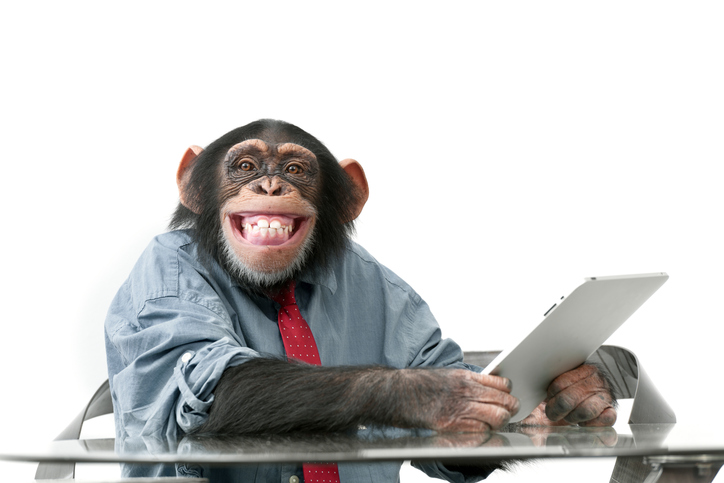 “A blindfolded monkey could throw a dart at a page of stock listings and do just as well, if not better, than a professional manager OR the S&P 500 Index.”

It’s tongue in cheek, but this common saying has an element of truth to it.  To understand why, you first have to understand how a human sees and uses market indices versus a monkey’s point of view.

For humans, indices like the S&P 500 and the Russell 3000 are market cap weighted, which means each stock’s weight in the index is proportionate to its market capitalization (share price times the number of shares outstanding). By this formula, the five largest stocks in the index right now are Apple, Microsoft, Google (A&C class combined), Facebook, and Amazon. They are’re high priced (relative to book value or asset value) growth stocks, and they dominate the market indices. On a chart representing stocks by weight, large-cap value (LV) stocks and large-cap growth (LG) stocks would dominate over small-cap value (SV) stocks and small-growth value (SG) stocks.

Large-growth stocks get a lot of attention from humans. But monkeys throwing darts aren’t impressed by weight; their darts hit stocks indiscriminately. A monkey’s perspective of the indices weights every stock equally. A Facebook stock would have just as much likelihood of being struck by a monkey’s dart as a small unassuming stock  in the SV or SG range.

The truth is, the smaller and cheaper stocks have historically had higher returns over time. The law of averages would mean that a monkey’s stock picks might include a lot more of these smaller, cheaper stocks than a human’s hand-picked portfolio—and be a better investment over time.

In theory, monkeys make great stock pickers for a second reason: they don’t panic about current events and politics, and they don’t jump on the bandwagon of “hot stocks.” They’re capable of emotionless decision-making. This is what it takes to attract stable positive returns.

As one example, a group of stocks known as the FANG stocks are considered the de rigeur golden ticket of investing. These are the most popular and some of the best-performing stocks in the market right now: Facebook, Amazon, Netflix, and Google (Alphabet). FANG stocks have gained between 15% and 90% in 2017 alone, and pulled the S&P 500 Index along with them.

But think back to 1999, when everyone thought the NASDAQ index was the only worthy place to invest. After the bubble burst the following year, it took 16 years to recover its losses. No one stock is untouchable.

Given this, why don’t we all hire monkeys to manage our investments?

Well, throwing a dart isn’t as reliable a method of picking stocks as this explanation would imply. Markets are more complex than dartboards or charts, no matter how they’re weighted. A good financial advisor doesn’t just pick the right stocks for you to invest in. He or she makes nuanced decisions based on additional factors and engages in smart trading over time.

A monkey is good, but a worthy financial advisor is better. If you’d like to read a more detailed explanation of why the monkey theory of investing is not truly sound, read DFA’s white paper “Quit Monkeying Around.”